The Examiner’s report on the Milborne St Andrew Neighbourhood Plan has been received – and subject to a few changes it has passed and should go referendum (or ‘people's vote’ if you like!) probably in August or September. 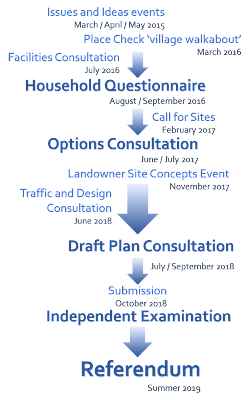 The Examiner was satisfied with the plan’s approach to assessing and dealing with the area’s housing needs, including the mixed use site allocation opposite the Business Centre (which is subject to a live application).  In general he was happy with nearly all the policies, with a couple of very minor wording changes.  The two policies that he felt did need a bit more refinement were the one on design (where he has left it to the Parish Council to make some changes, mainly to simplify it) and the one on parking standards (where he has said we should delete the need to comply with our proposed parking standards, because he felt that this would be over-prescriptive and also he wasn’t convinced it was helpful to deviate from the county standards).
So the Neighbourhood Plan is certainly gaining weight - which will need to be fully considered when all the 'rejected' sites whose applications are in and waiting for a decision get decided.
Posted by Jo at 06:53