Nearly neighbours, Holwell and Hazelbury Bryan parishes both went to the polls last week for their respective Neighbourhood Plans.  Both plans tackled this issue of how much housing should be built and where it should go. 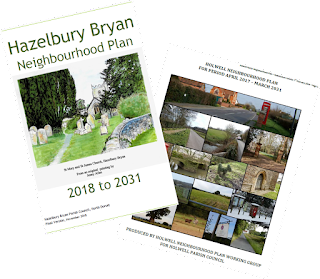 Despite the rather wintry conditions both had a good turnout of around 45% of the electorate, and a solid 'yes' vote (82% in Holwell and an impressive 92% in Hazelbury Bryan).

Hazelbury Bryan in particular has been besieged by planning applications for housing outside the settlement boundary.  These have been vying for approval in the light of North Dorset's housing shortfall, trying to get in before the Neighbourhood Plan plugs the gap.  Just a week before the referendum an application for up to 35 dwellings had been recommended for approval, but members decided to go against their officer's advice to give great weight to the emerging plan.  The Neighbourhood Plan should now hopefully get the attention it deserves in future officer decisions.

Congratulations to both groups for all their work, which was clearly supported by local residents.
Posted by Jo at 02:53