Another milestone reached for the Purbeck Local Plan - the examiner's post-hearing note has been issued today announcing that subject to modifications she believes the Plan is likely to be capable of being found legally compliant and sound.  Key changes include the revised housing target (up to 180dpa using the new methodology, but with no additional uplift necessary), the deletion of the proposed Green Belt amendment at Wareham, and a modified approached to the small sites policy to ensure that developments are proportionate to the size and character of the settlement.  The full note can be seen here: https://www.dorsetcouncil.gov.uk/planning-buildings-land/planning-policy/purbeck/post-hearings-note-20-03-2020.pdf
Whilst there is still consultation to be done, and possibly a further hearing session if necessary, this is certainly welcome news to all those that have worked so hard to get this plan through.
Posted by Jo at 14:41 No comments:

Moving forwards but hopefully before next century...

The Government published a paper "Planning for the Future" this week. 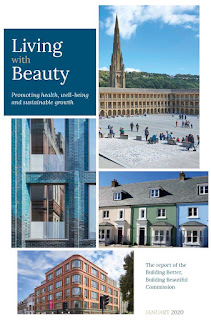 The paper does make clear that the formula for calculating Local Housing Need will shortly be having an overhaul, so an update to the NPPF is definitely on the cards before the end of the year.  The paper says that the update will also make sure that principles of good design and place-making "to support the creation of beautiful places" are embedded into national and local policies, and will be checking whether the current approach to flood risk is robust enough.

A useful overview is provided by Nicola Gooch here: https://imbusiness.passle.net/post/102g1lv/big-bold-beautiful-mhclg-sets-out-plans-to-reform-the-planning-system
Posted by Jo at 08:29 No comments:

Gladman not so happy with Schrödinger's cat

Press reports on Gladman Developments' disappointment in the outcome of some of their recent Court rulings made me take a look at a recently published judgement [2020] EWHC 518 (Admin).  This reiterates that, whilst the tilted balance and presumption in favour of sustainable development (NPPF para 11d) may be well-trodden paths in much of Dorset, the balancing exercise must take into account the development plan policies (and their intended primacy in decision making under S38(6)).  The decision maker can then decide and given reason for what weight these policies should be given, as part of the balance.

The placing of footnotes (and footnote 6 in particular) and stance on Neighbourhood Plans (as set out in para 14) both helped to confirm this approach.  Footnote 6 explicitly rules out the consideration of development plan policies - but is pegged to the end of 11(d)(i) and therefore does not apply to the balancing element of 11(d)(ii).  So by omission, policies in this Framework in that second part can and do include the development plan considerations.  Para 14 also talks about when Neighbourhood Plans should be considered under para 11(d) which would not have been needed to be said if all development plan policies were excluded in any event.

Interesting.  Well, depending on your outlook!  Looking at the bigger picture, it will still boil down to the decision maker's judgement on the whole balance, and with that, Schrödinger's cat always comes to my mind... and Gladman's too by the sounds of it. 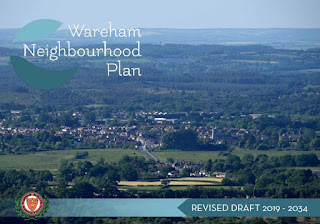 Wareham are starting consulting on a revised version of their pre-submission Neighbourhood Plan today. As a result of new sites being found within the town, they no longer need to release any greenfield (and green belt) sites to meet their quota - https://warehamplan.co.uk.
Policy H5: Westminster Road: has been redrafted and the allocation has been reduced in size (but including design elements from former policy LDP3). There is now no mention of land west of Westminster Road being added when the Neighbourhood Plan is revised;
New Policy GS3: Proposed Affordable Housing and Extra Care Housing, Bonnets Lane has been added - the 'new site in town'
Design policies have had a makeover, including a new policy on tackling climate change through good design.
Posted by Jo at 07:55 No comments:

And the results are in for Bridport 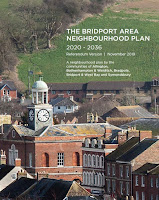 Bridport area's neighbourhood plan is now official. 87% of votes in support, and whilst the turnout was comparatively low (17%) that is not unusual for larger communities. Not helped by the weather! Congratulations to all involved.
Posted by Jo at 07:49 No comments:

For those of you out there beginning to wonder about whether you should be thinking about reviewing your Neighbourhood Plan, here are a few (hopefully useful) bits of information for you.

In terms of (1) the main trigger for this is if the housing land supply in the area falls below 3 years or if there is less than 5 year’s supply and your plan has not allocated housing sites to meet its need or it is more than 2 years past adoption (unfair I know).  Once any of those measures fail, then planning decisions will be made in relation to the presumption in favour of sustainable development.  Although this doesn’t automatically mean all planning applications will be approved, what it does mean is that sites outside of the defined settlement boundary cannot be refused merely on the basis that they are ‘in the countryside’ unless there is a case that there would be significant harm.

In terms of (2) in Dorset the Local Plan is anticipated to be updated / renewed by early 2023 (if they stick to their current programme).  This may well look at taking a different approach to development in and around the main villages (for example) as a common approach has not previously been taken across the county.  We should know more this Autumn when their options consultation starts (and I will hopefully post something at that time!)

So what would a Neighbourhood Plan review entail - and how long would it take?

Any review as a minimum would need to include revising the plan and supporting information (insofar as relevant to any changes you may be making), running the 6 week 'pre-submission' (Reg 14) consultation and then submitting it for independent examination.  The examination includes its only consultation, and is run pretty much as for a new Neighbourhood Plan, but only focusing on the changed elements.  The question then is whether it needs to go to referendum, which depends on whether the examiner thinks it introduces a significant change.

So the bad news is that I don't think a review could be done and dusted (with the plan then re-made) in less than 9 months, and quite possibly it will take a lot longer than that (read on...)

I have been keeping an eye out on some of the front runners - when I last looked the only one I spotted that had made significant progress was Farnham, which is now going to referendum next month (see their website) having started their review in 2018 and submitted their plan for examination in January 2019 (so a long examination which included a hearing).  This was certainly looking at a a significant change – they needed to identify land for a further 450 dwellings!  Chinnor is another example which is at examination but includes major new allocations.  Perhaps a slightly more 'borderline' case was Great Glen (see their website) which only added a site allocation for 10 homes (in a plan that formally had none).  But this was still thought to be significant enough to warrant a referendum (held last month).  From the look of it they started May 2018, and got to submission around May 2019 including site assessment work, and then another 8 months to the finish line, so around 20 months in total.  This would have been less (perhaps a year and a half) if they hadn't needed the referendum.

So how long will your review take?  Difficult to tell until you know what you may want to change, but I am happy to have a discussion with any of the groups I have supported previously if you want to get in touch.  The good news (and I know you are looking for good news at this stage) is that there is plenty of grant funding out there for reviews.
Posted by Jo at 09:50 No comments:

Neighbourhood Plans and the 2 year clause in the NPPF

OK - quite a few Neighbourhood Plan groups and individuals have been mentioning this to me recently - so I thought it best to revisit this point (which I think I blogged about at the time but despite raising objections to the NPPF at that time it didn't get changed by our MPs).

Most of the time, because Neighbourhood Plans (when made) are part of the development plan for an area, they should have a real influence on planning decisions.  This is because in planning law (Section 38-6 of the 2004 Planning Act) planning applications have to be determined in accordance with the development plan, unless material considerations indicate otherwise.

However, what the NPPF says, is one of those 'material considerations'.  And the NPPF talks about what should happen if the policies in the development (i.e. the Local Plan and Neighbourhood Plans), and specifically those policies which are the most important policies for determining that application, are out-of-date (in para 11d).  In such a scenario, planning permission should be granted unless the NPPF says it shouldn't be - so the decision-maker is basically being told to give those policies very limited weight, and only refuse the planning application if there would be real environmental harm.

So what does it mean by 'out-of-date'?  This certainly is the case when the Local Planning Authority does not have a 5 year housing land supply.  The NPPF then, in para 14, says what consideration should be given to Neighbourhood Plans for that area.  And this is where the '2 year clause' hits home (so only where there isn't a 5 year housing land supply of the Local Plan is otherwise out-of-date).  It basically says that any conflict with a Neighbourhood Plan should be treated as a reason for refusal, but only if all of the following tests are met:

a) the neighbourhood plan was made less than 2 years before the date on which the decision is made;
b) the neighbourhood plan contains policies and allocations to meet its identified housing requirement;
c) the local planning authority has at least 60% of its 5 year supply (ie the equivalent of 3 years); and
d) the local planning authority’s housing delivery was at least 45% of that required over the previous three years (this relates to something called the 'Housing Delivery Test' - the latest results having just been published here).

Now all of these seem slightly unfair on communities that have spent a lot of time and effort jumping through the hoops of getting a Neighbourhood Plan made, but the 2 year clause seems particularly unreasonable.  Local Plans are expected to be reviewed at least every 5 years - so why shouldn't a similar timescale be applied to Neighbourhood Plans in this scenario?

What can you do?  Lobby your MP to get this changed.  Lobby the Minister that head up the MCHLG, and Steve Quartermain who is Chief Planner at MHCLG (see their website).  I have heard they are revising the NPPF later this year - so now is the time to get this changed.

But just to reiterate - it only applies when the Local Plan is 'out of date'.  So usually when there is a 5 year housing supply, Neighbourhood Plans which are more than 2 years 'old' will still be given full weight in decision making.  But this is the case at the moment across much of Dorset.  So I will blog separately on the Neighbourhood Plan review mechanism for those groups who are thinking whether they wish to look into this now.
Posted by Jo at 09:04 No comments: